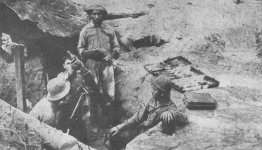 Yesterday we had a national holiday, so I did not post. I checked the blog and my mail from home using dialup.

On September 29, 1932, the Bolivian forces stationed at Fort Boquerón under the command of Colonel Manuel Marzana formally surrendered to the Paraguayan forces commanded by Lt. Col. José F. Estigarribia. This was followed by a siege of roughly 20 days, where some 8000 men (the bulk of the Paraguayan army) surrounded a force of roughly 700 Bolivians. The Bolivian army tried several times to break the siege from the inside and the outside, unsuccessfully. The besieged Bolivians fought bravely and with honor, and they surrendered only when they had roughly three shots of ammo for every men, no food, no water, and several casualties. Colonel Marzana is rightly regarded as a war hero in Bolivia.

This is commemorated as a holiday because the battle of Fort Boqueron showed what national unity can do. The people of Paraguay –despite their poverty, political infighting and corruption– decided to unite their forces, and the political leadership from President Eusebio Ayala downwards gave their full support to Lieutenant Colonel Estigarribia, a brilliant strategist trained at Saint-Cyr (France). The brilliance of Estigarribia and his wise use of resources led him to a successful conduction of the war. Additionally, for the most part of Paraguay and the Paraguayan Army, Boquerón was their baptism of fire. From then on, the Chaco war escalated from skirmishes to a full-scale war.

It is worhwile to mention that this battle also marked the Paraguayan baptism of fire of several Russian officers and troops who came to Paraguay as refugees of the Russian Revolution. When the Chaco war was set, they were enlisted as volunteers. One of them was Major Orefieff Serebriakoff, a Russian artillery officer of the Czarist Army, who led a charge in Sept. 28, 1932 (the day before the surrender). He fought bravely, and was mortally injured. According to reports, it was a bright and beautiful spring day. Laying on the ground and surrounded by his comrades, he looked at the sky and said, “What a beautiful day to die” and passed away.

Paraguay is fortunate to have people from foreign lands willing to give their lives for our country. I also salute the Bolivians, who never let the enemy take their possition by assault, and fought against an enemy several times their size, with bravery and honor.

The photo you at the upper left corner (you can follow the link to see a bigger image) depicts Paraguayan soldiers preparing to fire a mortar.