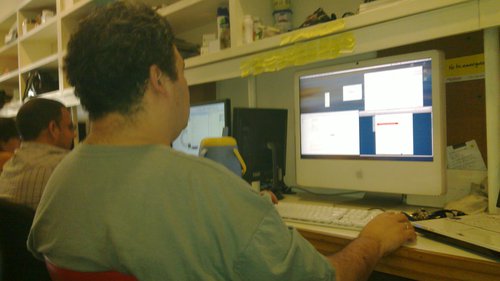 (Click on the image for a much larger version)

It’s been a while. I’ve been busy as usual, with really hectic days. My Christmas was nice, but January was a difficult month. I had to face several challenges, including several (and expensive) repairs to the car. I’m still sitting tight, but meanwhile there are news.

The PC I was using at the office (running an unpatched copy of XP; I don’t manage the IT operation, so don’t look at me) kept crashing again and again. The situation got so bad that one day I experienced > 15 crashes, thus seriously hindering my ability to get any work done. Since the only computer available was a Mac, guess what I’ve got.

The picture says it all. I’ve got an iMac with a nice screen, 300 GB HDD and 2 GB RAM. It is ancient, running Mac OS X 10.4 (Tiger), so you can get the idea. I think this is one of the first Macs running with Intel processors.

So far it’s been a nice experience. A Mac is a wholly different beast than a Windows or Linux PC. Things such as window or application management are done with a different workflow; and some of it could be downright annoying for someone used to a PC. But it gets the work done, and that’s important. All in all, an opportunity to learn something new. 🙂