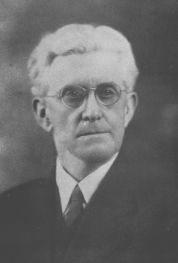 The image you see at the right is a portrait of Ford Hendrickson, an independent missionary who worked in Venezuela first, and then in Paraguay. He was born on September 11, 1875 in Richland County, Ohio (U.S.); the date of his passing is unknown to me.

Back in the day, I dug into the library of a classmate who was member of a Plymouth Brethren congregation; somehow she got into her library the papers of Mr. Joseph G. Martin, a New Zealander who established the denomination in Paraguay. Among Martin’s papers there was Hendrickson’s missionary autobiography were he described his endeavors. I found particularly striking his account of how he became motivated to do missionary work in Paraguay:

While in North America we had read an article on Paraguay in which the writer had written in rough language describing its poverty, diseases and wretchedness, and closed the article about as follows: “Paraguay, thou art a stench in the nostrils of civilization; the sooner you are disintegrated and divided and governed by better civilized countries, the better it will be for your people and civilization”. After reading this extreme verdict I suggested to Mrs. Hendrickson that if Paraguay was in such a needy condition, we should locate there. From this article and information gathered from other sources we decided to locate our work and general headquarters in Paraguay.

Taking passage on a river boat bound for Asunción, we sailed up the La Plata River to where the Parana and Paraguay Rivers join then up the Paraguay to Asunción, arriving about the first of September, 1928. Within one month we purchased the mission compound and repaired the entire property so that we could begin general work about the first of February, 1929.

I found this fascinating; and I would appreciate any hint about the provenance of the quote.